Shadowbane has one of the most uniquely customizable character creations systems of any multiplayer online game. There are so many options available that the whole character creation process may seem overwhelming to new players. Fear not! This article will guide you through the process of making your first character and provide the best resources for your future ones.

This subject deserves its own article because most decisions you make during the character creation process cannot be undone once you are finished. Later, if you decide that you want to change one of these decisions, you will have to make a brand new character and start over (this is called "re-rolling"). When a character is at a permanent disadvantage to their peers, they are referred to as "gimp". An example would be choosing a starting trait that grants a bonus to your sword-wielding ability on a character that uses a bow. This is why it is important to plan out your character as much as possible, or at least avoid making choices that lock you into a specific path.

If this is your first time logging in, your character selection screen should look something like the image below. Click an open character slot to begin the character creation process. 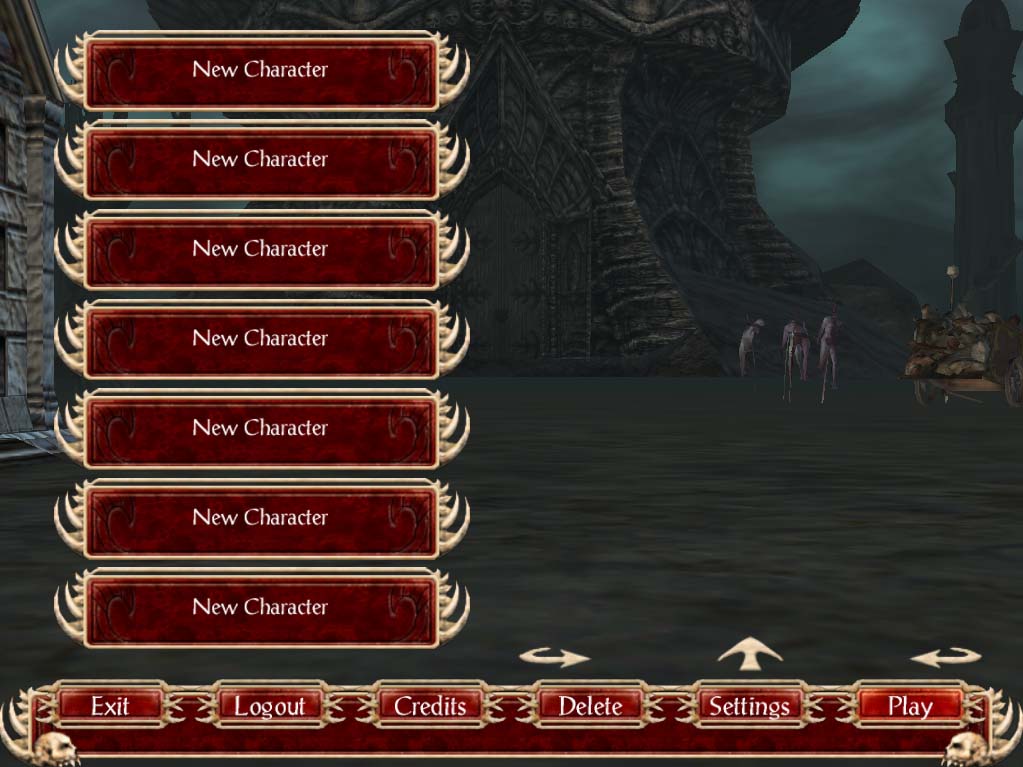 The very first decision you must make is your server. Shadowbane Emulator currently has one server: "Ardan". So this is an easy choice.

Shadowbane characters must have a first name and may choose a last name. There is a 15-character limit for each. Once you choose it, you cannot change it. Other than recognition, a name will have little impact on your ability to play.

As you may expect, your gender choice is mostly a preference. However, there are three prestige classes which are gender-restricted (see Fury, Huntress, or Warlock), and one Discipline which is female-only (Valkyr). Those planning on joining a strict Amazon Temple guild must also be female.

Your character's race is a major factor and will determine everything from whether monsters will attack you on sight to which class you may choose. Spend some time reading about each race to see which you identify with, or just look through them in the character creation screen.

Another factor in your decision of race can be its "creation cost". Every playing character is given 55 "Attribute Points" to start with (they just labeled "Points" on the character creation screen). Each race has an associated cost value which will subtract from those points. This is relevant because the number of points you have leftover will limit your attribute point allocation and trait selection a little later.

The creations costs per race are as follows:

In Shadowbane, your character begins its life as one of four "base classes", and then selects a prestige class at level 10. Its recommended that you decide on your prestige class during the character creation process so you can make better decisions about your trait and attribute layouts.

If you click on the red "Class" button, you can see which base classes your chosen race is eligible for (pictured above). Clicking on one of the four base classes will give you another list of which prestige class you will be able to promote to at level 10.

This decision will make the largest impact on your playing experience of any other single choice during character creation. Most veteran players enter the character creation screen with a prestige class. Once you promote, the decision is permanent.

Here is a list of classes to get you started. Most are pretty self-explanatory, such a Thief. Some need a little explaining, such as Doomsayer. Don't worry about each and every detail right now, though. As an RPG, Shadowbane is often more fun when you just dive on in and let the world be your teacher.

To help you along, each class has been marked with it's recommended roles:

The fighters are the brawn of the battlefield, and are valued for both their ferocity and durability.

The rogues are clandestine opportunists that exploit every vulnerability they can find in their enemies by whatever means necessary.

The healers are devout zealots that exact the will of the gods to heal their allies or destroy their foes.

The mages use secrets of the universe to twist reality to their will. They can be a great force, but whether it is for good or evil is often ambivalent.

After you have selected your race and your class, you may further specialize and refine your character.

There are five attributes. Those who have played tabletop RPG's will be familiar with these.

When you first begin, 25 of your attribute points have already been placed: five in each of the ability scores above. Most veteran players will recommend that you remove these points before you select your traits.

It is also important to note that the last five points before the "minimum" value are irreversible once you have finished the character. If you add points back to a stat from which you had "removed five" at creation, you will not be able to undo or refine that decision after you click "finish".

With its staggering 85 Starting Traits available, there are literally thousands of ways to build a character. Unfortunately, this level of customization makes this the least intuitive and most complex part of character creation. Fear not, for this handy tutorial will make it as painless as possible for you!

The first thing to do is decide what kind of character you want. We read above about how stats affect your character, and now is the time to apply that knowledge. Will it be a "glass cannon" with high intelligence and low constitution? Will it be a "meat shield" that is nearly unkillable at the cost of respectable damage, or perhaps a combination of both? Maybe you'd rather spend your points in a more specialized way, to run faster or be extra resistant to fire. The choice is yours.

You may hover your mouse over items in the list to see their benefits and their requirements. If you do not meet its requirement, a rune will have a red border. Examine the prerequisites closely, as you may be able to meet them by changing your stat points on the right.

Most of the runes fall into three categories: Stats, Skills, and Resistances.

Stat traits will affect your current stats, but more importantly, the maximum points you will be able to place in specific stat as you level up. For instance, the "Agile" trait costs 6 points and gives you 5 dexterity, but it also increases your maximum dexterity by 5.

This is important for your character's future because, once you are in the game world, you may find even better runes to use, and they will have prerequisites as well. If you do not have a maximum stat value of 85 (75 for Humans and Elves) or more, you will not be able to take advantage of those in-game runes.

A character can apply a total of 13 runes including Trait, Disciplines & Stat runes (16 if including the Race, Base Class & Profession).

Certain traits will grant you points in specific skills at the cost of attribute points, something that cannot be done once your character is created.

As useful as these seem, there are only a handful of situations were these will be useful to you:

Several traits will increase your resistance to damage by a flat percentage. These can be useful in specific situations when you know what enemies you will be fighting, but these resistances can also come from enchanted items in the game.

The only damage type you are sure to encounter on every character is physical damage, specifically crushing, piercing, and slashing. This makes runes like "Tough Hide" very nice on any character than can afford to apply it.

It is worth your while to spend some time reading the mouse-over tips for each of the trait runes. Seemingly meager traits, such as "Lucky" actually have quite a large impact as your character reaches its full potential.

Your hair, beard, horns, beak, what-have-you will have no impact on your ability to play. Choose what you think looks good!

Hair will be rendered invisible while wearing a helmet, which you will be doing most of the time.

Your starting kit is what your character will own once you log in. This does not lock you into using that specific type of weapon. Most choose a weapon that will make the starting levels a bit easier, such as a short bow, even if they do not intend to use a bow in later levels.

New players may find player-created character builds (or "templates") helpful until they learn enough to begin making their own. If you have a class in mind, check out some of these builds in the Templates article.

By now, you should have a great foundation for for a kick ass new character. It's finally time to take it for a test drive, go ahead and click "finish", then click "Log in" to get started. If you feel some extra pointers will help, proceed to the next article in the Getting Started series: Newbie Isle.