Before the existence of time, past and future were one. Spirits of the dead went straight into the Black (the Dark World) because there was no need of a journey - no time involved moving from point A to point B. The Black was sated, and energies flowed back out of it and into rebirth.

Time changed everything - the spheres of Light and Black were sundered, and an impermeable Barrier separated them. Now, the souls of the dead were trapped on Aerynth, where they soon learned to jump into corpses, and thus arose the first undead. The Elves were shocked by the new phenomenon, and quickly sought to combat it using magic. They decided not to prevent the formation of undead or destroy them all, but instead turn the new circumstance to their advantage: They invented Necromancy, and learned to command undead, channel dead spirits into matter, and even got a hint of the Other entities that lurk in the Black.

The Men of Ardan fought the Undead head on - they devised the arts of Undead Hunting to destroy corporeal undead, and quickly learned of the Null, the dreaded entities that live in the Black and serve almost as hive minds for the undead. The Null were trying to break the Barrier down. Ardan himself, the Nameless Titan, and all of the mightiest spell casters in the Blessed Realm tired to devise a solution. There were two problems: First, souls do not leave Aerynth upon their death, and second, the Dark is trying to rip through and "overwrite" the world of the living.

They built two solutions. First, the Ardani constructed, placed, and enchanted the Soul Stones. These black stones served as traps to the spirits of the dead - souls were drawn to them, consumed by them, and trapped inside. Second, the Nameless Titan and many other Magi wove the Net of Binding - a complex pattern of ley lines, laid out according to complex geomancies, that raised a barrier to bolster up the "natural" barrier between the spheres. The Net is anchored by a network of arcane signs and sigils, enchanted at various points all over Aerynth. The two solutions worked - the wave of undead ended (much to the chagrin of Elvish necromancers) and the Null were held at bay.

While the Net was designed to hold the Null off forever, the Soul Stones were only a temporary solution: their capacity, though great, was limited. And so it was that at the end of the War of Spite, after the All-Father saved the Men of Ardan, that the Undead began to appear again. The Nameless Titan warned the All-Father of the problem, beginning His quest to build the conduits to Heaven and Hell. After many sojourns into the black and battles with the Null, the All-Father finally accomplished his goal - he built the Gates of Heaven and Hell in His new fortress on the Moon. These served as conduits into the Black - not only were the spirits of the dead sent from Aerynth, but the Null were fed again, and their pressure to invade the living world relaxed. While there were still occasional instances of undead due to Necromancy or profound evil, for the most part they became a thing of legend.

So it continued until the Turning. There were spaces where the Net was weak (The Chaos Lords actually smashed the Net sigils near Ithriana's palace, creating a tenuous conduit to the Black Caeric would later quest through), but for the most part, the Unholy Legion left Aerynth alone. When the world was sundered, however, the Gates of Heaven and Hell were shut. The souls of the dead were once again trapped on Aerynth, and the massive numbers who died in the disaster and the plagues that followed spawned hordes of angry dead. Many of the Barrier Sigils were also broken or destroyed, and any Fragment of Aerynth without one was left unprotected - many quickly succumbed, turning into Dead Worlds.

The Druids devised the latest solution, tapping into the power of the injured World Tree to create the Trees of Life. By enchanting the petrified Acorns of the First Tree and weaving mighty rituals of revitalization and rebirth, they were able to create anchors for dead souls, drawing them back to the Tree and miraculously crafting a new body for them. There is one drawback, however - the rituals actually draw slightly on the power of the Black, and each time a soul respawns, a tiny amount of Dark Energy is introduced to the world. This "bleed through" of negative energy accounts for the Death Shroud effect, and some believe it occasionally infects unborn Humans, transforming them into Shades. The Druids found a loophole in the Net, if you will, and so now the Black, deprived of sustenance, has its potential conduit. The more people die and are respawned, the stronger the Dark becomes on Aerynth, and the more the Net is weakened. In addition, the Cold Spawn of the Mother of Winter are working to destroy Binding Sigils on the fragments of Aerynth, hoping to pave the way for the Null. 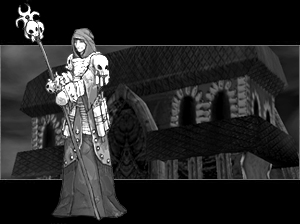 Also, some particularly enterprising Shades have discovered the secret of the Soul Stones, and have also built on the foundations of ancient Elvish necromancy, devising rituals that will free the angry souls trapped within them, or even transform them into one-way valves that will allow the Black to enter Aerynth. The Cult of Katullus is actively seeking the Soul Stones, hoping to use them to unleash storms of angry dead and draw in unholy legions to darken the world forever.

There is a final, even darker threat. One of the Druids who helped devised the Tree of Life solution has gone quite mad and believes she has begun to realize its implications. After extensive travel and arcane research, she has learned of the existence of the Net, and sees it as the only thing that kept Aerynth from being totally destroyed at the Turning. The entire world should have been consumed - instead, everyone lingers on in this bizarre state of blasphemous half life, and the Great Cycle is gone, a mockery. This Druid has left the ranks of his order, and become the Anti-Druid, who strives not for harmony in nature but instead for destruction of nature. She's an Aelfborn (possibly the cause of her dementia), and has allied herself firmly with The Briar King, acting as one of his closest advisers and lover. She hopes to turn the disaffected Aelfborn into an army of guerilla terrorists, who will start massive wars on every fragment between the estranged factions. The Temple is a good place to start. Wars mean death, death means respawning - if the fragments can be pushed to a peak level of carnage, the Net will fail, and the world will be consumed. The travesty of life will be over.