From Morloch Wiki
(Redirected from Boon)
Jump to: navigation, search

Divine favor is an in-game mechanic designed to grant special buffs to individuals if they meet specific class and race criteria. The Divine favor system was added to the game in the Rise of the Upstart Gods patch on March 17th 2003.

Guild masters may choose to erect a shrine to a particular creed associated with a race and/or class by purchasing the necessary building deed from a builder (See the Shrines article). A city may have a maximum of three shrines, no two of which can be the same. The city who has the most favor with their creed may receive the best boon. In order to receive boons, the shrine requires a hireling called a Votary, purchasable from a steward.

While playing, a player may come across items of importance to the lore of their race or class called offerings. If that player visits the appropriate shrine, he or she may give the offering in tribute, which will give the hosting city favor. Each offering has a list of creeds and a corresponding number value. This value indicates the amount of favor they are worth to that shrine when sacrificed. 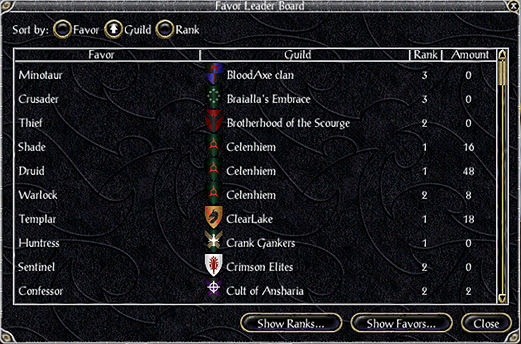 The favor leader board shows which guilds have contributed the most offerings.
To receive the boon of a creed, the player must speak to the Votary NPC. Only players in the same nation and who are compatible with the shrine may use it. For instance, an Irekei Bard may only use an Irekei Shrine or a Bard Shrine.

Each time a player receives a buff from a shrine, they spend one divine favor. Monitoring and managing divine favor points is important because the buff you receive changes depending on how "favored" you are with the race or class shrine. For this reason, a guild message is announced whenever a player accepts a boon. Players may also open an interface when speaking to the shrine's Votary to see which guilds have the top favor scores for each shrine type.

In addition to receiving buffs from shrines, the two leading shrines of each shrine type will 10% of their standing each day. This is to ensure that newer guilds can always compete in the system.

The buffs granted by shrines are powerful and can last between one and two hours. They cannot be removed by any means except player death, expiration, or being overwritten by a more powerful boon.

The following is a list of boons a first place Shrine will grant a player who meets its race or class requirement.

City leaders are able to destroy their shrine, as they can with other city buildings. However, once a shrine is destroyed, any favor spent on that shrine is lost.

Following a bane, a shrine can only be destroyed by an enemy if the tree of life protecting it is destroyed. Once the shrine is in a 'destroyed' state, anyone near it can double click the rubble to receive a corresponding number of "super offerings". These offerings will be 'generic' offerings that can be offered at any shrine. There are no limitations on who can loot a destroyed shrine.