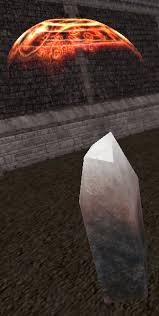 A looming bane stone
A bane is a player-scheduled organized PvP event. The goal of a bane is to capture or defend a player city. A defending guild's entire city is at stake when it is "baned", so as one can imagine, these events are the largest scale of PvP fights in the game.

A responsible guild's assets are protected by the tree of life and are invulnerable. In order to remove this protection and make the walls and structures vulnerable, a bane event must occur.

To begin a bane event, a player must first create a Scroll of Summon Bane Circle on a player-owned, max-rank sage NPC. The player has the option of creating eight different strengths of bane stone. The stone's rank must be equal or greater than that of the Tree of Life in the city they intend to attack.

Below are the differences between ranks of Scrolls of Summon Bane Circle.

Once the scroll is created, a member of the attacking guild's inner council must physically carry it out to the city they intend to bane, then double click to place it. Once the bane circle is planted, the bane event will take place three days later. The defending city's guild management can choose a time within the server's predetermined bane window of opportunity for the bane circle to become active. If no time is selected, it will be set to a default time.

Placement of a bane circle is critical. Defending cities will usually have at least one set of walls among other structures which surround and protect the Tree of Life. The attackers will have to defend their bane circle while also maintaining siege equipment in order to knock down all enemy buildings which obstruct line of sight with the Tree.

Much like the Tree of Life, a Bane Circle will have slots of protection which will make structures invulnerable until the bane circle activates. The only structures an attacker may place on the defenders city grid are bulwarks and war tents (both available from the Siege Engineer NPC).

Bulwarks is a structure which can host three of any combination of siege equipment, including catapults, ballistas, and trebuchets. Catapults were designed to be most effective against enemy players, ballistas against enemy siege equipment, and trebuchets against all other enemy structures. Siege equipment can be buffed up by a player who has applied the Artillerist discipline. Siege equipment works like a stationary pet, attacking whatever the controlling player commands. To gain control of a piece of siege equipment, one must either purchase a Rod of Command from a Siege Engineer, or use the "Command Siege Engine" power available to the Commander and Artillerist disciplines.

War tents can host a banker and a siege engineer for access to siege weapons and additional bulwarks.

Outgoing damage may be increased or decreased if there is a high disparity of attackers versus defenders to produce a less one-sided fight.

The attackers will win if they destroy all ranks of the Tree of Life. If it is destroyed, the owner of the bane circle will become the new owner of the Tree of Life, barracks, walls, and siege spires that belonged to the defeated city. All other buildings left on the site will become unprotected and vulnurable. To ensure a more even playing field is maintained, banes are governed by the anti-zerg mechanic that allots buffs and penalties based on numbers of players on each side.

Should the defenders manage to destroy the Bane Circle, the city is fully protected once more. The recently defended city cannot be placed under another bane circle from any source for 24 hours after the last one was destroyed. When viewing the city's information on the world map, it will indicate how many banes the city has defended against in the "sieges withstood" field.