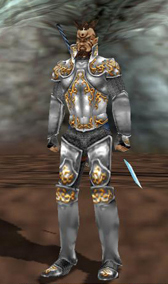 To look at the Aelfborn Warrior, many would think him nothing unusual. Unfortunately, the truth of the matter is much different. The Warrior known as Rauko'edan is the spawn of an unknown human female and the Demonlord Vellogthu who now serves as the Herald of Morloch. It is rumored that roughly twenty years ago, Vellogthu took human form and roamed the lands of the Fragment of Death as a Warlord. It is during this time where Rauko'edan's mother fell into the demon's clutches. From then, the woman went into hiding and raised Rauko'edan in the wilds, away from civilization. Recently, Rauko'edan has come into contact with the world. Apparently he grabbed hold of some objects left behind by his father during the time when Vengeance' Throne had risen on Death and Vellogthu was slain. Recently, an Elf Channeler by the name of Xarrina had sought the items left behind by Vellogthu bringing the wrath of "The Wolf" (which Rauko'edan calls himself) upon her. Oddly enough, the Virakt Akar'akt and the Lords of Death assisted the Elf. After many days of battles and quests, the Irekei claimed the objects and killed the Wolf, sending the Half-Human, Half-Demon warrior into the Pit of Chaos.

Since then, the Aelfborn Warrior was spotted at the Feast of Saedron, searching for the Oracle known as Vaughra for betraying him. He has risen from the Pit and has mastered some of the powers granted him through his blood from his father who is a Channeler of immense power.

His quest has remained the same, to find his father and slay him.

Behavior Characteristics: Rauko'edan acts much like his namesake. He seems to prefer traveling about as either a Wolf or Werewolf. He is honorable in his own fashion, giving praise to those who fight hard even if they are the enemy but gives no quarter to those who threaten him or his pack. The Demonblood is strong within him, though, and there are times, especially during a bloody battle, when an almost berserker rage overtakes him and he fights on until either he is dead or corpses litter the ground around him.

Specific Reaction Types: Strongly dislikes those that serve Chaos due to his father and abhors the Black, which is an affront to nature. He prefers the company of those who are more at a balance with nature such as Druids and Rangers but also talks to those he considers to be mighty warriors that coincide with his idea of honor.