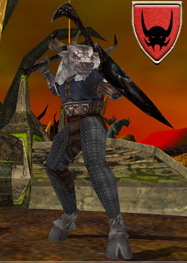 A mighty Minotaur bred during the War of Flames, before Humanity escaped the oppression of the Deathless Empire, Kodor was a servant of House Telentheril, and was in Tir Telentheril when Elvish Magi removed it from reality. When the city manifested in Tyrranth Minor some months ago, the brute led the defense of the City, but it fell and all of his masters were slain. The Minotaur fell as well, but then something wondrous happened: he respawned, and has wandered the world since. Voldrok found him, and broke the Binding Spells that had enslaved him to the will of the Elves. Kodor has learned now that his people are the adopted children of Morloch, and awaits the day the Maimed God will again walk among his fosterlings. Incidentally, Kodor can only say one word: "Kodor".

Recently, Kodor has been seen on Maelstrom and in Sea Dog's Rest on the Mourning fragment. He appears to not only be much stronger but to able to speak a few more words although his favored phrase is still "Kodor!". What his servant of the Maimed God is doing, none can say but it stands to reason that only chaos will be left in his wake.