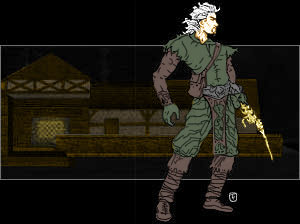 While most Healers and Priests draw power from their faith in the All-Father, there are other kinds of priests who walk the World, serving other masters. The most ancient and mysterious of these are the Druids, an ancient sect of priests who worship the primal Beast Spirits and Braialla, Green Mother of the World. The Druids hold their rites at ancient stone circles lost in the deeps of the forest, far from the prying eyes of Man. Their rites and rituals are the echoes of ancient ceremonies intoned by the Elves under the First Twilight ages ago, and their potency has not faded. Through the power of their faith, Druids attune themselves with the world around them, utilizing the hidden connection between all living things and the World itself. Plants, beasts, and the weather all respond to a Druid's magic, which can heal, transform, or command the forces of nature. For four Ages of the World the Druids have taken the responsibility of their power very seriously.

No beast of field or wild will ever seek of its own will to harm a Druid, and many serve them as their eyes, ears, and protectors. Long ago, the Druids were ruthlessly persecuted by the All-Father's faithful, who saw the Druidic religion as the source of the Great Betrayal of the Elves. Driven into hiding, the Druids have worked in the shadows ever since, healing lands blighted by war or the touch of Chaos, destroying creatures that disrupt the natural order, and trying to minimize or offset the damage done by civilized peoples to Braialla's great bounty. Above all, the Druids work to restore the cycle of Life, Death, and Transformation, the basis of the Sacred Balance at the heart of nature. The Turning was a dreadful blow to their efforts, and now the great Cycle is entirely broken, and Braialla lies mortally wounded. These desperate times have brought the Druids out of hiding, for the time for direct action has come.

Druids live simple lives, far from the excesses of civilization. Some are stationary, healing the sick in secluded villages still loyal to the "Old Ways," helping woodfolk with their knowledge of animals and herblore, or protecting the ancient Groves and Temples. Others wander even into the tumult of civilization, spreading their simple creed to all who will listen and offering wisdom and compassion to those who need it. Perhaps their efforts will serve to bind this world's wounds, and restore the Balance so tragically lost.

Greetings. I must warn you, do not drink the water from that pool, or it will be your death. That spring and all the lands around are tainted, blighted by the touch of Darkness. I see you bear weapons, and you look ready for a battle. Do you seek Lanscorr the Black Wizard, that vile Shade who serves the whim of Darkness? Be at ease, for I am not he. Your errand is ended before it begins, I'm afraid, for I have driven him from yonder tower. Last night the children of the Green Mother fought back against his perversions of the Balance: the beasts, trees, and very stones rose up against him, marshaled by my call. For I am a Druid, and could not stand to see this vale corrupted any longer. The fight was dear, and alas, the victory is a hollow one. For Lanscorr will walk the World again, no doubt, and it will be many many years before this spring flows pure again, and all the life has left this soil.

Life. It is everywhere, all around us, and yet most folk are so preoccupied with their own small portion that they cannot see the ocean of life that teems around them. If they did, they would remember that the food they eat, the grass they tread on, even the very earth they till and air that they breathe is alive. Most folk of the world venerate the All-Father, but they forget that they had a mother too: Braialla, the Green Mother of the World. Some have not forgotten. Far from the sprawling cities, we Druids still sing their ancient hymns, and venerate the Mother of All Life. Our ways are the Old Ways, that hearken back to a time before fields and plows, before kingdoms, before even the first daylight. In his folly the All-Father crafted Man to stand apart from nature, as Her masters. But how then can we stand apart when our bodies are nourished by the fruits of the land and the flesh of its beasts? We are of this world, and only by living in harmony with all things in nature can any being achieve true enlightenment, and understand his place in the Great Balance.

You have no reason to fear me. I've heard the frightful tales the village folk tell of Druids. They say we are not truly men at all, but elfspawn flaunting our Elvish blood, and that we steal babies in the dead of night like the Fey of the Enchanted Wood, and that our pagan rites involve human sacrifice. These are the delusions of the simple, the lies of the frightened. We are not godless Pagans - we revere the All-Father's name, praising Him as the Consort to the Green Mother, the Bringer of Spring, but we do not venerate Him before all others. Do not fear us. Leave us be, or help us, for we seek only to heal and rejuvenate the World and restore the Cycle.

Life, Death, and Transformation: the Great Cycle which defines the movement of Spirit through the universe and serves as the foundation of the world and all of Braialla's bounties. Since the dark day of the Turning, this eternal cycle has been disrupted and all Balance has been lost. There is still life and death, but now there is no transformation, no movement of the spirits of the dead through the cycles of being. At first, the souls of the dead were twisted into undead abominations, the enemies of all Life. We Druids turned the tide of that darkness: it was we who discovered how to use the Trees of Life so that the dead are clothed in new flesh, provided that their names are carved into the Tree. The undead threat is thus diminished, but the Cycle is still undone. Alas, this solution is no solution at all, for our enemies are eternally reborn also, and a new age of bloodlust and savagery has begun. The unenlightened revel in these dark times, thinking that Death itself has died, that they can do whatever they like, kill whatever they like, despoil whatever they like. But I ask you, how long can the World endure if the spirits of the dead are not allowed to move upward into higher forms? How long will the Dark that lies Outside lie quiet without the spirits of the deceased to feed its hunger? The circle is broken, and Doom draws ever closer.

But these grim matters are none of your concern. I ask you to leave this place, and tell all you meet to let this valley lie quiet, for its healing will be long in coming. Go now, and I assure you that no beast will hinder you, and fair weather shall follow you home. If you doubt me, go to yonder tower and see for yourself - the Wizard is gone. Go find his Tree of Life if you wish, before he leeches the Life from another valley. If you can do so, I will be in your debt.