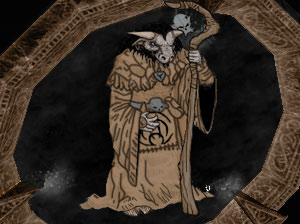 The Dark Lords have ruled the Pit of Chaos from time out of mind, since before the Gods entered the Universe. Ancient Elvish legends recount that the All-Father fought and slew Kolaur, the High Emperor of Chaos, long before Aerynth came into being. Legend has it that Kolaur laid a great curse upon the All-Father as he lay dying, and called upon all the Dark Lords to avenge him. The Dark Lords have spent the ages since brooding in their hate, longing for the chance to take their vengeance on Pandarrion and all of his creations.

Through the long history of Aerynth, the Children of the Gods have ever been loathe to worship the Dark Lords of the Pit. The archmages of the Deathless Empire learned their ways and names in the Age of Dawn before Time's beginning, but offered them pacts and bargains instead of worship. It was not until the Hordes walked upon Aerynth in the War of the Scourge that the Dark Lords won their first mortal converts. Some turned to Chaos to bargain for their survival, others were driven mad by horror or despair. In a time when many felt the Gods of Aerynth had failed them, the Dark Lords' call was irresistible. By the war's end, cults of Chaos had sprung up, each centered around a prophet, a Doomsayer who strove to bring Kolaur's curse upon the All-Father's children. As hideous as the Hordes of Chaos were in battle, time and again the Grand Alliance found its efforts hampered by traitors within their own ranks, devotees of Chaos who received their orders through the mouths of Doomsayers.

The final defeat of Chaos cut those first Doomsayers off from the favor of the Dark Lords, and the early Chaos cults were quick to fall before the sweeping purges led by the Holy Church. It was not until Morloch returned from the Pit late in the Age of Kings that the Dark Lords gained new servants among the peoples of Aerynth. The Maimed God took the Minotaurs as his own, and invested the worthiest chieftains of the bull-men with the power of Chaos. So the Doomsayers were reborn, serving as shamans of Morloch to the savage clans, and spreading the message of Chaos to others who would listen. In time, new cults arose, and soon there were many Doomsayers hidden among the ranks of the disillusioned or the insane. Remembering the lessons of the past, the new cults of Chaos worked in secret, awaiting the day when the Chaos Gate would open yet again and the masters might purge the world again.

That day may be close at hand. Late in the 97th Year of the Age of Strife, the seals on the Chaos Gate weakened, and the taint of Chaos began to flow once more. The Chaos cults emerged from hiding, convinced that their time had finally come. Now Doomsayers operate openly, decrying the feeble Gods of Aerynth, spreading strife and madness where they can, and offering the disillusioned new paths to power.