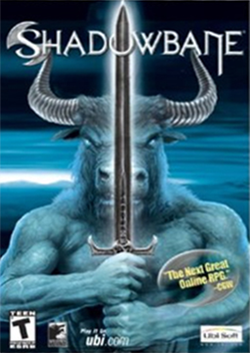 Shadowbane is a free fantasy role-playing video game (MMORPG) created by Wolfpack Studios and published on March 25, 2003 by UbiSoft for Windows and Mac platforms. Originally commercial and subscription-driven, Shadowbane was launched in March 2003, and was the creation of text-MUD veterans J. Todd Coleman, James Nance, Josef Hall, Patrick Blanton and Robert Marsa and a team of 45 programmers, designers and artists. Official servers closed on July 1, 2009.

Shadowbane was a top-10 best selling PC game at launch, and had two noteworthy aspects. First, the majority of the game world allowed for open player versus player combat, making it an early pioneer title in the PvP MMO genre. Second, it was the first major MMO to offer dynamic world content as a primary feature of the game. Most MMOs are static, meaning the world itself does not change based on player actions. Dynamic worlds allow player to change the game world itself; morphing terrain, building and destroying buildings and fortifications, and setting up patrol paths for player-hired AI combatants. The game was considered a "cult hit" and sustained a small base of followers, but technical issues plagued the game at launch and failed to retain much of the early fanbase shortly afterward.

After the sale of Wolfpack Studios to UbiSoft in March 2004, the live service was transitioned to a new management and (largely new) development team, led by Frank Lucero and Ala Diaz. This team later splintered off to become Stray Bullet Games in June 2006, and Mark Nuasha was brought in to run the organization. On March 15, 2006 the game was made free-to-play. A system of short ads was introduced on March 6, 2007 to fund operating costs, which are displayed when the game is opened or closed and when a character dies (with at least 10 minutes between death ads). On March 19, 2008, all servers were closed to prepare for the "Shadowbane Reboot," a relaunching of the game to capitalize on stability and performance gains hindered by previously existing data. All player characters and cities were deleted in this reboot. On March 25, 2008, the fifth anniversary of the game's launch, two servers were brought online followed by a third due to overpopulation. The game was closed the following July.

The regular game takes place in a dark fantasy world called Aerynth (the world will sometimes depend on the servers, many of which have unique world maps). Gameplay features many aspects typical of role-playing video games, such as experience points, character classes, and fantasy races. Character creation was fairly extensive, allowing for detailed, differential characters to be created.