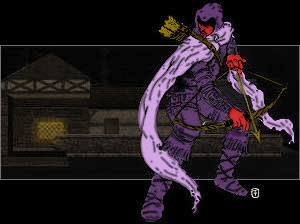 Life is never easy for Rogues, whose trade so often flies in the face of local law and custom, and can leave them shunned by all they meet. In time, however, those who can survive long enough to gain a measure of success become Thieves, true professionals and masters of their craft.

Success brings them not only wealth but finally a kind of status. True Thieves no longer live off of the wealth they steal - they take contracts from wealthy patrons to steal, and are paid handsomely for their services.

Thieves stake their reputations (and their lives) on their ability to pass even the most attentive guards without being seen or heard, and are master climbers and locksmiths. Should these skills fail, however, a Thief makes a deadly foe in combat. They frequently learn the use of poison, and can also learn combat techniques that can quickly immobilize or cripple their foes. If pressed, they are also masters of defensive combat, using evasion and speed to escape harm.

Many Thieves are content to live in cities, plying their trade in defiance (or sometimes at the behest) of the local authorities. Merchant guilds or Noble Houses frequently hire Thieves to disrupt a rival's operations, or to humiliate them by taking their most prized possessions.

The Thieves themselves must walk a fine line to remain neutral, and master Thieves are often contracted by their most recent victim to deal revenge to a previous employer. While such a position can be very lucrative, many Thieves tire of the intricacies of local politics, and either band together in Guilds to protect their interest or leave the cities altogether to pursue a life of Quest and Adventure.

Every Thief's ability to bypass physical obstacles, move unseen, and hamper their foes in battle makes them a valuable part of any adventuring company.

So, had a rought life then? Orphaned early on, were you? Or are you one of those highborn sorts who came to like the taste of risk, and got yourself in trouble? Maybe you ended up on the wrong side of a war, or some Lictor's crusade. Makes no nevermind to me -- I've been there, in the gutter. I crept and stole and climbed my way out. It's amazing what a quick hand and a glib tongue can build. Since the High King broke the world, the line between Kings and Vagabonds is thinner than ever. You must know what I mean -- you talk the talk, and I see you still have all your fingers. Talent, that's what you have - and maybe a dash of wit to spice it. Well, if you want to play for real stakes, you'll need much more than that. Another ale, if you'd be so kind.

You'll hear the Bishops and Bards lamenting this "dark age" and all its troubles, mourning the death of the old age, crying that the world has died. Not so, says I. This is an age not of darkness, but of wonder: if the world's a dungheap, far better to be a fly than a dove! For those who know how to seize an opportunity, even these troubled times are full of promise. Some heroes don't work for glory, or wisdom, or to exalt the name of a God or saint: they work for money, plain and simple, looking only for profit and the easiest means to get it. Your princes and bishops, they all harvest their fair share of gold as well, and they have the nerve to call us Thieves! Ha!

We Thieves stake our reputations (and our lives) on our wits and our skill. To ply our trade, you have to have the focus and steadiness to pass even the most attentive guards without being seen or heard, even in the open at high noon. And if a catlike tread is not enough, the rest is bladework and the red, red wine of murder. I know three dozen wawys to gut you before you even see my knife. I can teach you the lore of poisons, and how to stun a man in one quick touch, or cripple him in two cuts. You want to call yourself a Thief? I'll teach you to dance like they do in Rovayle, so that even a storm of swords can't find your flesh.

Success brings a Thief not only wealth but a kind of status. True Thieves no longer live off of the wealth they steal -- they take contracts from wealthy patrons to steal, and are paid handsomely for their services. In many places, we've gone into business for ourselves. Most of the great cities boast an organized crime syndicate of thieves, vagabonds, and cutthroats. While some tightly run outfits with master thieves, apprentices, dues, and specific territories, while others are more rowdy: I can tell you some tales of the Extortionist Associations of the Merchant Cities, or the Council of Street Gangs in Rovayle. Think you have what it takes to join one of these outfits, or built you own? We'll see. Maybe someday you'll get so good you can get gold and free ale just by talking. I'm already up to two mugs and some fine coin from you, good my student. There's your first lesson: trust nobody. Now, here's your purse back. Pull that dagger, and I'll show you a thing or two.