Storing this here in case newb isle is changed.

Now that you've created your first character, it's time to begin leveling!

This guide will take you through the process of getting your character from level 1 to level 20 using a specific adventuring path. The purpose of this guide is to help get you acquainted with the game, not to play it for you! As an open-world sandbox, Shadownane will be much more fun if you break away and begin doing you own thing as soon as you feel comfortable enough. 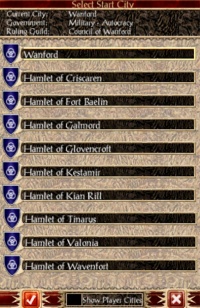 A journey begins with a single hamlet.
The game will ask you which hamlet you'd like to begin at. Unless you are coordinating with friends, this choice really doesn't matter too much. For this guide, let's choose the Hamlet of Fort Baelin. Click its name and make sure its border becomes highlighted, then press the check mark button.

You will soon find yourself in the small village. Go ahead and explore the area by right-clicking on the ground. You may rotate and zoom your camera with your mousewheel or with the number pad arrows (2,4,6, and 8). You may interact with NPC's and doors by double clicking on them (you may also single click, and press they hotkey "F" to interact).

Here are some of the folks you will find in Fort Baelin:

Now is a good time to learn about the target cycle hotkeys. Pressing semicolon (;) will target the nearest NPC or monster in your vicinity. If you press it again, it will move to the next furthest. To go in the other direction, use the apostrophe key (').

It seems Fort Baelin is in a bit of trouble. Their usual guards have been called away to serve the kingdom, leaving the small village mostly defenseless! They have been waiting for a brave hero such as yourself to come and protect them. Let's head northwest to beat back some of the encroaching Batlings!

This is a good opportunity to mention another way of travelling. You can also right-click places on your minimap to move. Try it now! Place your cursor over the red markers northwest of you. This will get you running exactly where you need to go. don't worry if you overshoot a little. You can always stop by issuing another move command on the ground right next to where you are.

These keys can be rebound by going to Options -> Hotkeys.

While following this guide make sure to take advantage of the buff pots available at any alchemist. They grant +55 to a single attribute for only 1k gold and have 5 charges, or get a concoction for 2k that does all the buffs.

Locate the nearby camp of Batling Whelps and Bats (if you choose Wanford on Dalgoth as your beginning hamlet) and start killing. Each hamlet has different types of mobs. If there are other people, ask to group to make it go faster. The level 1 to 4 camps are always adjacent to the starting hamlets so if you don't see it right off go to the edge of the hamlet and just start walking the perimeter till you find it. It's often on the North edge. You can also look for red dots on the minimal located in the upper right corner of your screen. (Red dots indicate mobs.)


To attack a mob using a weapon, enter combat mode (C) and double click the your target or the more convenient way is to just hit Ctrl-A while targeting a person or mob.


Once you hit level two or three (or four) it is time to do your first training train. The hamlet you started in should have a base class trainer (fighter, healer, mage, rogue) that you can use to train some basic skills. Refiners, or NPC trainers that can untrain skills and stat (Int/Dex/Str/Con) points, have been implemented, so don't be afraid to train skills early on; you can always untrain them later. For characters using a weapon there are also rank two weaponsmiths in the hamlet where you can purchase up to 50% weapons that will make future leveling easier. Make sure you only train your weapon skill (fighters/rogues) or focus skill such as sorcery (mages) to get the best return for your trains early on. Healers are very weak on the starting island. Either train hammer skill to 25% or just train some points into Blessed Mending and try to group with someone to kill mobs for you while you heal them.

Same as level 1 to 4 except mobs you should be killing are Orcs, Batling Thralls, etc. (again dependent upon which Hamlet you begin at). Check the map for good locations.

Congratulations, you're ready to promote! Return to the Runemaster at the Hamlet you began at. Click on Runemaster and you will now see and have access to Lion's Gate, Sacred Dalgoth, and Therikos Senn (on Dalgoth map). You can teleport there, or repledge if not already invited to a guild by someone. Once you teleport, standing at the Tree of Life, press semi-colon key (;) to target next NPC. In this manner you can easily find the trainer you need to promote to whichever class you've chosen. Go to the appropriate trainer. Double click the trainer, and choose "Promote to (whatever class you're promoting to)". then click on "Train skills and powers". If Fighter or Rogue character, it's best to choose to train the weapon you choose to use. If mage, put training points into Sorcery. If healer, put points into Blessed Mending and Benediction. Once Benediction is 69%, and at level 25, you will receive Summon.


This is also a good time to distribute Stat Points. To do this, type "S". You will see the name of your character/level, and Strength, Dexterity, Constitution, Intelligence, Spirit along with +/- to the right of each respective box.

Repledge to Wanford (on Dalgoth) if you don't belong to a guild yet, and run to the North to Vermin Fens (on Dalgoth). If not in a group, it's best to find one to help level more quickly, especially if you're a healer based character.