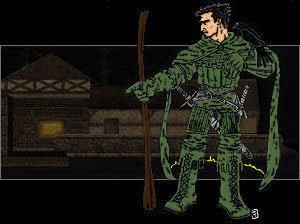 Roaming the wild with stealthy tread, rangers are formidable warriors, fighting to protect the wild places of the World from evil and destruction. Longtime friends and allies of the ancient Druids, the Rangers share their quest to restore the great Balance of Nature. The Rangers fight a tireless battle against all creatures that exist outside the natural order, from the Twisted Breeds of Chaos to the undead of the Unholy Legion. Any who despoil the bounty of nature are also marked as their enemies, and many poachers and woodcutters have found themselves on the receiving end of a ranger's justice. The beasts of the wild see rangers as their kin, and these wardens of the wilderness walk among them without fear. Rangers are masters of the bow, and also favor wooden staves and swords in battle.

The rigors of life in the wild demands that every Ranger be able to find his way and survive in the wild. As a result, the World knows no finer hunters, trackers, and woodsmen. Like their brother Druids, Rangers can also attune themselves to the wilderness around them, and their faith in Braialla and the Beast Lords gives them powers over plants and beasts. While every Ranger's first duty is to protect Nature, his second duty is to defend the peoples of the World from harm, whether the Ranger's aid is appreciated or not. Long the targets of suspicion and superstition, most Rangers tend to keep their calling a secret. Few ever suspect that the dour trapper that wanders into their village every so often for supplies is actually a master swordsman and deadly archer, who slew an entire Troll horde to keep their village safe.

While not particularly fond of towns and cities, rangers consider them a necessary evil and permit them to exist, provided that they do not expand too quickly into the pristine wilderness. Traditionally secretive, the Turning has brought about a change in some Rangers' attitudes, and some have come back from the woods, walking among Men openly. The significance of the Turning cannot be denied, these Rangers argue, and the time has come to reconcile past conflicts and stand together against the darkness to come. All Rangers know that the great Balance has been disrupted, and all Nature hangs perilously on the edge of oblivion. Most believe that a great crisis is coming, a fight for the destiny of the World. No matter the cost, the Rangers intend to win.

Lie still, and try not to breathe too quickly. The Orcs' arrows were poisoned, but fear not: This herb will blunt the poison. Chew this root, and fear nothing, for you are with me now. There, that should feel better. How came you to walk this trackway, so far from any hearth or home? This is no place to wander idly, looking for plunder. The hills weren't safe before the War of Tears, and they're deadly now. You should consider yourself lucky that Orcs are the worst you've met. There are fouler things abroad in these hills, with lairs less than a mile from here. I know them well, and watch them all.

There have always been dark things in the World, even from its uttermost beginnings. The treacherous Irekei, the demon hordes of Chaos, the dead of the Unholy Legion, the twisted Orcs and Grobolds, and other horrors haunt the wild, thirsting for destruction. The Children of the World have always needed defenders to hold the shadows at bay. Most look to the deeds of great Knights and Crusaders, thinking that these champions are the ones who keep the shadows at bay. They are wrong.

There are others, working in secret, who move in the wild spaces far from the eyes of men, fighting a shadowy war against any who would disrupt the World's natural order or do harm to her children. We call ourselves Rangers, and we make it our duty to learn every inch of the country under our protection, and see to the well-being of everything within it. Ours is an ancient and noble profession, born of an ancient order of protectors dating back to the height of the Elvish Empire. Relax, I am no Elf, nor aelfborn either, but a Son of Man the same as you. The Elves recruited able Men to enter their noble order more than an Age ago, and now most rangers are human. Once mighty Ranger Knights rode to battle beside the Prelates and Crusaders of the All-Father, and our praises were sung in every land. Alas those days have long passed.

At the beginning of the War of Tears the Ranger Lords spoke out against Cambruin's hatred of the elves, and refused to follow him in the War of Tears. The folk of the High Kingdom quickly turned on us, denouncing our worship of the Green Mother and our devotion to the Wild Lords of the Beasts. Our ranks withered by persecution and crusade, we Rangers were driven into hiding. Long we dwelt in the vast swamps and fens of the South, where we learned the arts of stealth and survival. It was there that we took the scorpion for our symbol: small, cunning, swift, and deadly to any who feel its sting. And so the Rangers crept out of the swamps and have wandered through the World, still loyal to our cause. Our faith in Braialla grants us powers of healing and protection. No wolf, no bear, no boar shall ever hunt me: our service to the Wild Ones has made every Ranger a friend of all beasts. We have never sought vengeance for the strife of the past, and we never will. However misguided our brothers of the fields and cities may be, they are our brothers yet. And indeed, if we set aside our mission to seek revenge in some pointless vendetta, what would then become of the World?

Those Orcs who found you were part of a vast host of the things that were on their way to plunder yonder town. Two of my fellow rangers and I scattered them a few nights back, and it will be long before they come this way again. So I fear you have come to harm in part because of my actions. Allow me to repay you - not far from here there is a glen with a pure, cold spring. There you can wash your wounds, refresh yourself, and sleep in peace. Tomorrow I shall lead you back to town along paths few know, and deliver you safely from the wild. I ask nothing in return, save that you think and speak kindly of us Rangers in the future, and that you walk more carefully through these hills in the future.

Come with me now, and walk only where I walk.