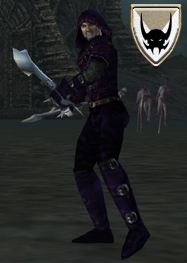 Not much is known about the leader of the reborn Vorgrim Legion. If one were to look upon rosters from the original Vorgrim Legion that fought alongside the Malog the Warrior during the War of the Scourge, there was a human assassin that went by that name. Needless to say, this was prior to the Turning and it appears whatever humanity Khalder had, is long gone.

Recently, Khalder has joined Kodor and Vollana on the fragment known as Mourning and helped build the Throne of Morloch, a city which houses the reborn Vorgrim Legion. What is the goal of the minions of Morloch? It appears as if only time will tell.