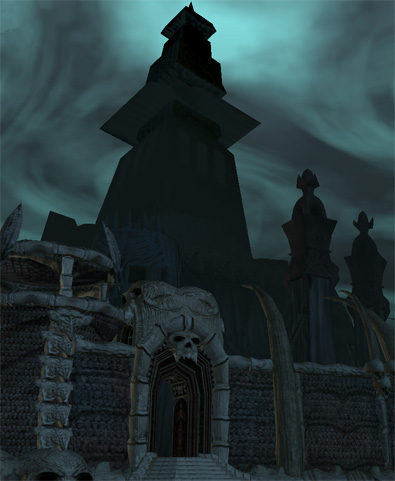 Lich Queen's Keep
Ithriana the Lich Queen is a major antagonist in the Shadowbane lore, and an epic encounter found on Oblivion Isle, in the Plain of Ashes.

Role in the Lore

In the Age of Days, Ithriana is introduced as a beautiful Elf woman, "her hair like threads of shining silver, her eyes the deep violet of dusk". She tricked Beregund the Bold into stealing the Shadowbane from the Dwarves, whom the true god Thurin entrusted to keep it hidden. After he recovered it for her, she revealed that her father was the king of Elves who had betrayed the All-Father with the sword in the Age of Twilight, and that she would use the sword to become the queen of the world. As Beregund died, he cursed the sword to be the death of all who would wield it. Upon returning to the Elf kingdom, the blade caused the Elves to argue about who should use it, which gave the forces of Chaos a chance to attack. This is known as the fall of the Deathless Empire. The chaotic forces destroyed much of the kingdoms; however, Ithriana seemed to somehow rise from the dead along with a few of her captains, to be swallowed by a dark mist and not seen again that age.

Over a thousand years later, in the Age of Kings, the Shadowbane sword was found buried in Ithriana's lair by Caeric Blackhammer, a knight of Cambruin. Caeric killed her, thereby "breaking her deadly spells forever".

The cover art for this expansion depicts Ithriana holding Shadowbane.

"Ithriana's Love Song" is a power given to Bards at level 18 that allows them to charm mobiles, making them act as pets.

Ithriana has multiple transformations, casts area of effect power blocks, flight removal, and inflicts severe physical damage. Like any mob, if she is lured too far from her home, she will teleport back and the encounter will reset.