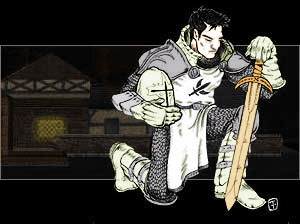 The Church of the All-Father has many servants, and just as the All-Father himself is a warrior as well as a creator, so the Church must defend its flocks as well as provide for them. A vast army stands ready to defend the Holy Church, the army of the Crusaders, holy warriors who know no fear.

When the hordes of Chaos shook the World at the beginning of the War of the Scourge, Saint Adelmo the Patriarch called a mighty crusade against the unnatural invaders, and placed the All-Father's blessing upon any who would take up arms in the Church's defense. From that day to this, they have worn white for purity and blue for the All-Father's strength, as vast as the endless sky.

Some crusaders are Called into divine service by their faith, while others begin their lives as warriors, living as mercenaries or even brigands before they discover the All-Father's glory. Crusaders serve as guardians and defenders of cathedrals, or soldiers in the Patriarch's grand army, defending the body of the Holy Church from any who would oppose it.

In the days since the Turning, the Soldiers of Grace have a new duty as well. The most stalwart Crusaders are elected to venture out into the world, seeking news of the All-Father's fate, and helping the innocent wait out the dark times until He may return. Every Crusader is ordained as a priest of the All-Father, through their grasp of the liturgy pales next to the Prelates, the masters of the Holy Church.

When they take their vows, every Crusader is assured absolution of all their sins and promised the highest reward if they do not turn from their duties. So redeemed, Crusaders hold an unshakeable faith in their cause, and know no fear of death, pain, or failure.

Even magic cannot break a Crusader's morale, and their battalions are feared by evildoers throughout the Petty Kingdoms. Crusaders are made even stronger by their faith, which grants them powers of healing, protection, and fortitude, bestowed upon them by the Saints and Archons.

In the course of two Ages of the World, the Crusaders have never shirked from their duty, and have continued their war against the forces of Chaos and Darkness. Any who raise arms against the innocent or the Holy Church had best be on guard, however, for the fury of the Crusaders is fearsome indeed.