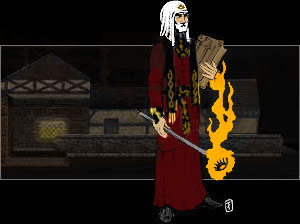 The days since the Turning have seen the rise of a new religion, a faith that has made its presence felt in every corner of the sundered World. Nearly a century ago, a group of learned theologians left the Holy Church of the All-Father, claiming that it had lost its way and was incapable of redeeming the World in this Age of Strife. They founded the Temple of the Cleansing Flame, devoted to the redemption of all peoples through the eradication of evil, sin, and heresy. In the decades that followed, the followers of the Flame have carried on their battle for righteousness with all the ferocity and intensity of the fire that they venerate.

Confessors are the priests of the Cleansing Flame, charged with winnowing the righteous from the wicked, and exposing evil and sin wherever they may lie. Motivated by the Twelve Articles of Faith, they have continued the High King's crusade against the Elves, and have added many other races to the ranks of the sinful. They pray to the All-Father daily, and their powers arise from lengthy invocations of the Archons and the Blessed Saints. Saint Malorn the Just, Kindler and Keeper of the Flame, is their greatest patron, and through him Confessors can work mighty miracles of fire, smiting the unrighteous and unholy, or keeping shadow at bay. Miracles of healing and protection are also theirs to command, but such blessings are reserved for the pure and faithful. The agents of the All-Father's final justice, Confessors can also lay mighty curses and maledictions upon the wicked in punishment for their sins. Confessors put the spiritual well-being of their flocks far above their physical well-being, testing and rewarding the faithful rather than feeding or clothing the poor.

Those who prove themselves worthy can count on the servants of the Flame for protection, and most cities have at least one Temple where Confessors guard their parishioners from the forces of evil. A Confessor's highest duty, however, is the ongoing search for evil. Many Confessors roam the World, rooting out sinners and heretics, trying them, and ultimately punishing them. Many communities seek out the red robed priests whenever they suspect the hand of darkness is at work, for a Confessor's investigation is always thorough. Depending on the individual Confessor, an investigation and trial can involve abstract philosophical debates, meticulous surveys of evidence, mystic divinations, trials of ordeal, torture, or all of the above. The forces of darkness are wily and elusive, so Confessors must be as clever as they are fanatical, and tireless in their work.

Do not be afraid. I realize that this will be difficult for you to believe, but I mean you no harm. I am here to help you. I see that the crowd and the guards have... mistreated you. I give you my word, they shall answer for it. The trial is ended, the verdict rendered. You have been found guilty of heresy against the All-Father, of sins of thought and sins of deed. The black stain of your collusion with demon worshiping magicians is visible to all.

Why am I here? It must seem strange to you, after yesterday's proceedings. I assure you, my soul has been filled with nothing but kindness and pity for you from the moment we first met. Even in the midst of the Ordeal of the Irons, I wanted only to help you, not hurt you. I know... the pain still lingers. But take heart. That which was burned and cut yesterday was nothing but flesh, raw clay. The soul within you is the object of my concern, and it may yet be spared any harm. All you need do is confess your guilt, and tell me the names of your accomplices in blasphemy. I ask you once, will you confess?

Still defiant, I see. Your will is a powerful thing, and were it not bent to evil, it would be admirable. The trial yesterday was most... unpleasant. It need not have been so, yet you forced my hand. Why did you feel yourself so compelled to resist, despite the pain and humiliation? Was it that you fear to divulge the names of your coven-mates? Are you concerned for their safety, or do you fear they shall turn their black sorcery against you if you name them? Or was it simply pride, base, selfish pride? Your guilt was revealed, both by the testimony of righteous souls and the intervention of the Holy Saints. The Darkness that has corrupted you cannot hide from my eyes, for I am a Confessor, a servant of the Cleansing Flame, and no evil will escape my judgment.

Saint Malorn the Just, the founder of our order, was given his commission from on high by the Archons themselves. We who stand in the light of the Flame are his loyal servants, and upon us is placed a most onerous duty. Just as diseased flesh must often be burned or cut away to save the life of a sick man, we Confessors seek out diseased souls and cut them away, that the World can be purified. I have cut your flesh, broken your bones, and burned you so that you might be cured of the sickness that has taken root in your soul. My work brings me no pleasure, and I repent the horrors I must work in the name of the higher good. But know this - my devotion to your spirit is too great for me to shirk my duty, heavy though it may be. Persist in your resistance and I will cut deeper. I ask you twice, will you confess?

Very well then. I know this hurts, but corporeal pain, the pain of the flesh, is fleeting. Upon your death (and rest assured, your condemnation is pronounced - nothing can stop it), your soul will be wracked with the pains and torments of damnation. And when you escape eternal torment and are returned to flesh, I shall begin my work again. And again. And again. I will never tire, for the Cleansing Flame burns eternal. Or, if you prefer, the pain can simply... end. Is that not better? Do you see how much lighter you feel now? It is a simple thing. Lay aside your hateful pride, confess your wrongs, and return to the bosom of the All-Father, your creator. The torment will end quickly, and when your soul is fleshed again you shall be redeemed. Will you still persist in your prideful denials? Pride is born of the will the All-Father gave to us, his favored children, but when sin deforms the will into pride, pain is the only result. You see how quickly the torment can return? But it can all end. Right now. I ask you thrice, will you confess?

So be it. Brother Templar, consign him to the Flame, and post a guard on the Tree. Tomorrow we will begin again.